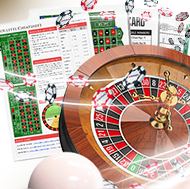 You’ve been playing roulette for a while, conquered the basics and you feel like you are just teetering on the edge of knowing how you can completely master the game. You know that when you do you will start raking in gigantic rewards. But it’s always just out of reach, and the “devil’s wheel” continues to torment you. Well, believe us when we say we know how you feel. Luckily, players with much more mathematical genius than us have devised systems that they believe will beat the board and ultimately give the player the edge.

Is It Really Possible To Beat The House Edge?

This question has plagued mathematicians since the invention of the wheel. Well, not that one – the roulette wheel. In fact, the game was used to establish the basic theory of probability, a mathematical model we all still depend on today.

Since then, numerous mathematicians have tried their hand at taming the wheel. Many have failed, but a few strategies have famously stuck around. These aren’t utterly fail safe, but are celebrated as the closest you can possibly get at giving yourself the edge. When played over a long period of time, these systems will eventually fail you, however, if utilised tactically and in the short time they can be the blissful answer to all of your roulette prayers.

The Most Popular System: The Martingale

The Martingale System is one that will probably be the most familiar to most of you, due to its simplicity and seemingly fail safe strategy. However, the Martingale is still a bet, and you could end up losing everything before you are rewarded by it. In theory, it’s pure genius, but the casinos have their ways of making sure that not everyone is rewarded by it. Let’s go through it and see if the Martingale is right for you.

As I said, this strategy owes its fame to its simplistic nature. You make an outside bet on either red or black and then place a small bet. Every time you lose you double your bet. The theory is based on the fact that eventually you will win and gain back everything that you bet, plus the profits! Theoretically, every time you lose you are giving yourself an extra chance for bigger profit. That sounds excellent, you are thinking, when can I start placing my bets?

Too Good To Be True?

However, there are many reasons why this system doesn’t quite work out as planned for many people. Firstly, a lot of casinos, both online and offline, place a maximum betting limit on roulette games – usually around $1000.

This means that if you haven’t won by the time your bet doubles itself to that limit, you’ll be at a loss. And this can happen remarkably quickly! If you start with $1 you have to win in under 10 rounds before you hit the $1000 limit. For the risk averse, this can seem a too small turn around margin.

However, I know there are those of you out there thinking, “I like the sound of those odds” – and you are right, it is more likely that your colours will come up before the end. However, many people find this frustrating, as after a few rounds of winning $2 or $4 dollars at a time they end up making their starting bet a lot higher – which can only lead to disaster. Patience is key with this system! Along with being prepared for potential disappointment.

Grand Martingale System – Up The Ante

You can also play the using the Grand Martingale System – which is essentially the same as follows, but increases your profit margin. After every loss you double your last bet and add an additional “unit”, like $5. This gives you a much higher profit margin, but also takes you to the casino limit much faster, so be wary!

This system is based on the betting fallacy that a previous bet influences the subsequent one. For instance, if you lost on the previous bet, you should have a higher chance of winning the next time. While, this is not the case, as the previous outcome has no impact on the subsequent one, many players find it an approachable entry into roulette systems and the world of probability.

It’s more satisfying to play roulette with a strategy, as it gives structure to your bets. Most people find this more entertaining than the random scattergun approach. Using a strategy focuses your mind, and keeps your head in the game. Playing randomly without focus is the best way to lose money. Let’s take a closer look at how it works.

First decide what you are going to classify as one unit, depending on your budget and the maximum betting limit at the casino you are playing in. Somewhere between $5 and $50 is about average. Place your first bet; make sure you make an outside bet, preferably on even money bets. If you loose, increase your bet by one unit. Keep doing this until you win, and then decrease your bet by one unit.

This game is good for players who like to maintain a continuous presence on the board, opposed to the Martingale system, which sees you starting from scratch every time you win.

Check out these related topics

Get the most out of your bankroll and have a more enjoyable game. Our team gives you their top tips for Australian gambling.

The payout percentage is the amount you get once a casino has taken its cut, and we'll show you which ones are bigger and better.

Curious about Pokies games? We'll give you a quick overview of what they are about and how you can get the best plays from them.

Using strategies is a great way to focus your attention and to play with structure. It’s far easier to keep track of your wins and losses when using a system and it will keep you more heavily invested in the outcome of the game. In the long run, all systems fail due to the house edge.

However, if used for short bouts of play, roulette systems can be highly rewarding due to the mathematical unpredictability of short term play. The best strategy advice a player can receive is to walk away after a big win and pocket it – because as they say, lightning never strikes twice!